Lots to report from the HUG lab in Minnesota.

“Skip” as he likes to go by, is a jack of all trades who was looking for a way to get some hands on experience in the LENR field when he stumbled onto the MFMP.  Since Minnesota was an easier journey from Vancouver than France, he offered to come help HUG with its LENR work on a purely volunteer basis.  Given the snow this week, he may be having moments of regret.  We’re very happy to have him around, though, as he helps us see our work through fresh eyes and a bunch of good questions. 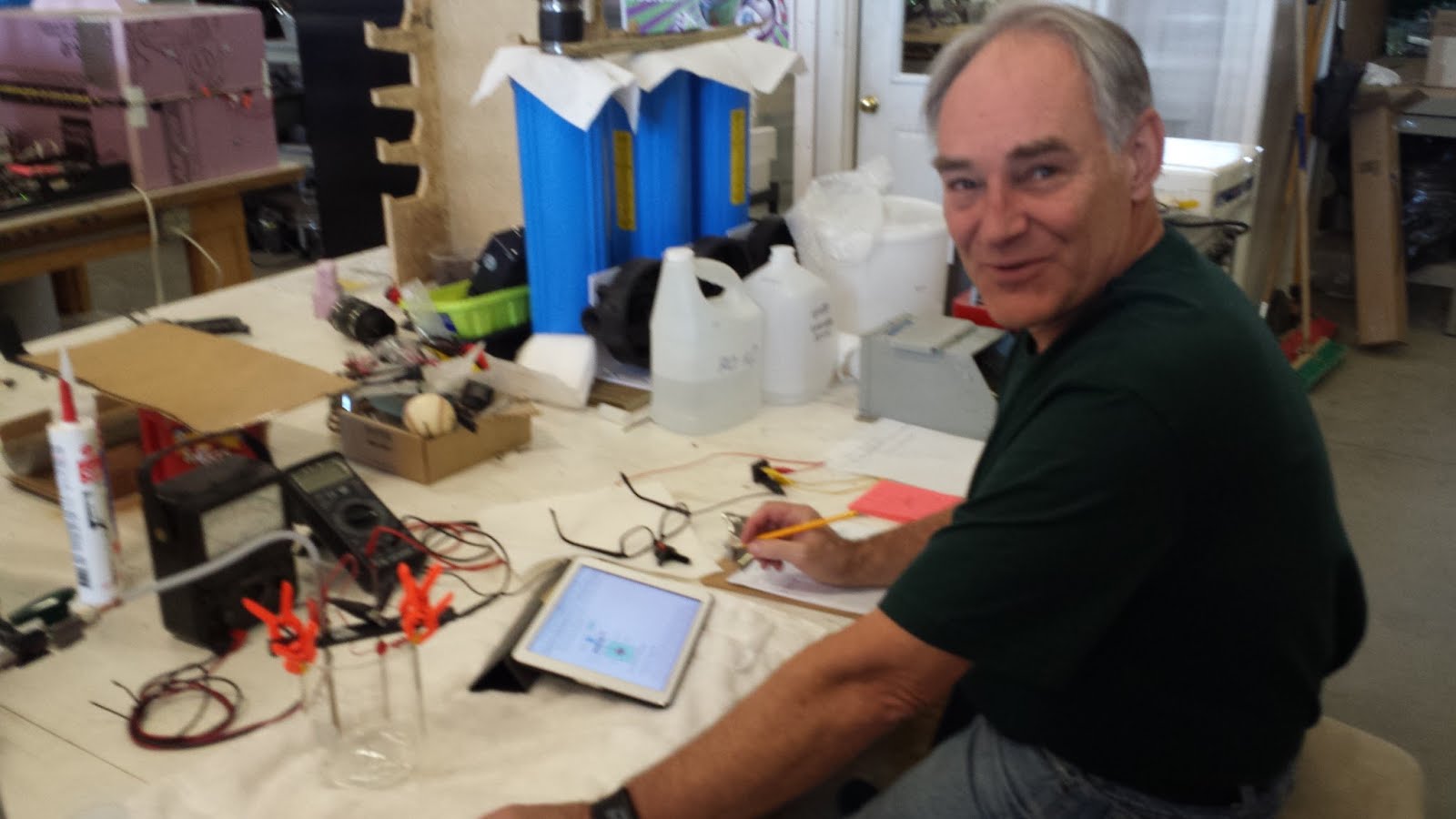 He has been here a couple of weeks and has a couple more based on his initial plan.  Our goal is to give him a basic introduction to many of our techniques and our instrumentation system so he may continue experimentation either on another visit here or back at his home.

Skip's first undertaking was to whip together a quick Mizuno type plasma electrolysis cell out of parts we had on the shelves.  While it was not instrumented adequately to do a quantitative study, we did enjoy getting a feel for plasma happening during electrolysis.

Skip has taken on things like the SEM and HUGnetLab instrumentation configuration, and brainstorming on a new powder reactor.   While he is not an expert in LENR and he's the first to admit that he isn't a scientist, but he does claim to be having fun while learning.  (There are more bedrooms available for volunteers, if anybody else is interested.)

We also received Stoyan's sparker to stimulate a powder cell as described elsewhere on the site.  Now we need a powder cell wrapped in a calorimeter to use with it.

New Powder cell and calorimeters being discussed at HUG

We drew something on the whiteboard that seemed pretty cool, so we are moving forward on a couple of variations on it.  Let us know what you think.  <Detailed Design Document>

We revived an old experiment back on March 11th, the LENR Cam Cell, and have been tracking a thermal anomalies.  There have been random spikes in two of the three temperatures on the cell.  The third temperature seems to decrease at the same time the other two increase.  Here’s a look at what I mean below:

These spikes are in the range of 3-6 degrees and they seem to be random.  We see the T_Wire increasing along with the T_Cu (the silver wrapped thermocouple), while T_Pt decreases.

We tracked this anomaly through a gauntlet of tests.  First we assumed it was a software or firmware problem.  We compared the data from two tests to verify the anomaly was only present in the LENR Cam Cell and we rolled back the firmware version.  The anomaly persisted.

Then we swapped very single hardware component for HUGnetLab, thinking that it could be a bad board or power supply.  This was not the case.

Then we tried playing with magnets to see if they had an effect.  Those results are detailed in the Evernote entry for the 3rd and 4th of April, but were inconclusive.

Finally we stepped the cell through a range of pressures and temperatures to detail when the anomaly appears.  It turns out that at ~70 psi the anomaly is present in the range from 150 to 250 C.  Then we varied the pressure while keeping the cell power input at 45W.  The anomaly was present between 58-73 psi.  The Evernote entries on March 31st and April 1st detail these tests.

Since then we have been stumped as to what might be causing these anomalies.  We suspect convection currents within the cell but we cannot be sure.  Looking for any detectable gammas that are present during those events is on our to-do list, but it requires writing a data processing program that we haven’t gotten to, yet.  I think it is a long shot that we will see anything but it may turn out worth it.

Any other ideas for what to test would be appreciated.

HUG is helping him prepare and configure the hugnet data acquisition system.  We will post on this as Nic gets things put together.

I see you're currently ramping power up on CTC #3 "HUG Made Wire", which appears to be containing an active wire that is currently decreasing in resistance as cell temperature reached a critical threshold. It would have been interesting to know more about this experiment.
Quote
+2 #4 LENR Enthusiast 2014-04-21 19:23
Im sure skip will be a great addition to your team.
Great to see so much effort and how your doing great work
Quote
+1 #3 Ecco 2014-04-19 11:30
@Robert Greenyer: I'm looking forward to seeing that. I can't stress enough that in my opinion Mizuno's latest dry nickel cell might be one of the most significant recent LENR experiments.

I seem to recall that the cell has been already opened once for inspection, but that didn't prevent thermal anomalies from reappearing afterwards.
Quote
+1 #2 Robert Greenyer 2014-04-19 10:42
@Ecco

Maybe a type of one... but he needed much lower voltage as low pressure.

We are preparing a reactor design inspired by his work that should get round the main challenge - that of thermometry.
Quote
+2 #1 Ecco 2014-04-19 09:38
Is Stoyan's sparker suitable for a replication of Mizuno's dry Nickel-Deuteriu m cell presented during the 2014 MIT CF Colloquium?
Quote
Refresh comments list
RSS feed for comments to this post
JComments