Well, we interns are finally nearing the end of our research phase, we're about to actually do stuff! Real stuff! With our hands! We're currently in the planning phase of the experiments are here to solicit whatever information you can give us that you think will help us along the way; papers to read, places we can buy stuff, pointers on experimental procedure, concerns, comments... anything helps.

The first experiment that we are going to attempt is essentially a replication of work done by Oriani, modified with elements from both Aizawa and Kowalski's experiments. The experiment involves low current electrolysis between a Pt wire anode and a Ni wire (or film) cathode in a lithium sulfate solution electrolyte. The electrolysis cell will be outfitted with a CR-39 detector on the bottom in contact with the cathode. CR-39 is a plastic commonly used in eyeglasses that detects penetration from high energy charged particles. When a particle penetrates into the CR-39, it leaves a track of radiation damage in its wake that can be etched out via a NaOH solution and observed with a microscope. If all goes according plan, we should see clusters of these tracks on the CR-39 that originate from a hypothesized nuclear reaction occurring in the cathode (or electrolyte).

The Google doc embedded below contains a detailed description of the experiment and the materials we need.

Any help you can offer on the questions posted at the end will be hugely appreciated!

This experiment is less traditional and will be going off of research performed by Italian professor Alberto Carpinteri.  In his research he applied a force until failure to pieces of rock using a hydraulic press and observed neutrons and transmutations on the surface of the rock samples. Carpinteri used samples of Green Luserna Stone, Carrara Marble, and Magnetite of different geometries and sizes.  For a neutron detector he used a BTI bubble detector. To make things a bit more interesting, we have come across a paper analyzing Carpinteri's data that claims his data is too correlated. While this may be discouraging if it is true, we will use our test to to acquire more data and compare our results. The basic setup of the experiment will utilize the 50 ton (445 kN) hydraulic press we have on site, a wall surrounding the rock to shield and contain, a neutron detector, rock samples, and cameras to monitor the experiment. By testing a variety of rock samples we are hoping to see a variation in neutron counts above background levels.

The Google doc posted below further explains the experiment and will be continually updated as the procedure is refined. It would be a large help if anyone could provide suggestions for sources of rock samples and the neutron bubble detectors!

First of all, thank you for your input here on the blog.  All comments are taken into consideration and the protocol is continuously updated to reflect these observations.

Progress is being made! After a couple phone calls, a source for scrap granite in the area has been found and I will be picking up some of the stone this afternoon. Wes and Malachi brought in a few rocks containing quartz that could be interesting samples or at least good for practice. The scrap granite and rocks will likely need some work before they are ready to be crushed, but we have a wet saw on site that we can use to try shape up the stone. After receiving a price quote from BTI about the bubble detectors we are making a decision regarding ordering.

We are looking for suggestions for a supplier of magnetite samples (as well as any type of rock you would like to see us crush) and a software program that would allow us to record using multiple webcams connected to the same computer.

Well, I'm a little late in adding my update, but update I will.

First of all, the decision has been made to skip the Ni film portion of the procedure. Unfortunately Ni film is far too expensive to be a worthwhile investment for us. Other than that, most of the materials are being ordered, I'm still having a little trouble getting a hold of the company where I'm going to get the CR-39 (a company called Track Analysis Systems) and acquiring the Mylar film is a bit troublesome, but I just got off the phone with DuPont and hopefully they'll be sending me some small sheet samples... fingers crossed.

A slight change has been made in the control procedure, as can be noted in the Google Doc (I removed the "Stuff I Need" portion because most of the links I had have been changed. If you are curious about my ordered supplies, I have a new purchasing list I can post). Essentially, the new plan is no longer to perform a live dummy electrolysis cell, as we are not certain that Cu or Fe won't give positive results, so instead we are going to stir the control cell with either Ar or nitrogen gas. This will create bubbles in the solution that simulate bubbles created during electrolysis that could possibly attract radon and radon daughters to the Mylar film or Ni cathode, which would otherwise result in a false positive. Also, it has been suggested to us that in order to account for the fact that CR-39 chips can have an inconsistent amount of track marks before they're used, chips will be etched and counted before they are ever used, and then the data that we use will be the difference in the number of tracks before and after. I personally believe this is a great way to isolate the results as much as we can to something weird going on during electrolysis.

I welcome any other suggestions you guys have on possible control tests. Also, if anyone knows exactly to what degree the Mylar film will block other energetic particles, like neutrons, tritons, or 3He, that information would be extremely helpful.

Your blog should go viral. You need initial traffic only.
How to get it? Search for: make your content go viral Wrastain's tools
Quote
0 #25 Alfie 2017-11-09 17:13
After looking at a number of the articles on your website, I really appreciate yoir techniquje of blogging.
I added it to myy bookmark site list and will be checking back in thhe near future.

Please check out my website as well and telll me hat you think.
Quote
0 #24 Ecco 2013-07-17 18:09
@Edwin Pell: I haven't checked the paper in detail as I don't know much about nuclear physics (and thus can't judge whether the theoretical explanation is sound or not) and as I am aware that papers written by Widom or Srivastava usually make sense only to a few select people. I was mainly referring to this sentence in the abstract:

A theoretical explanation is provided for the experimental evidence that fracturing piezoelectric rocks produces neutrons...

Neutron production from the fracture of piezoelectric rocks
A Widom, J Swain and Y N Srivastava

Neutron production from the fracture of piezoelectric rocks
A Widom, J Swain and Y N Srivastava

I really appreciate your interest in my Ni film quest, but unfortunately, it seems the costs outweigh the experimental benefits for us. Getting film that cheap is quite expensive no matter how you look at it, so it looks like we're just going to do the Ni wire cathode experiment. While this is a bit of a bummer, I believe the wire should be a great experiment, Oriani used a wire cathode and claimed to get results in 25 consecutive experiments.
Quote
0 #20 Ron B 2013-07-15 14:50
What would really be cool is if you could get a camera that could shoot 1000 fps and film some slow motion clips from the rock crushing. I think the cameras that can do that are pretty expensive (like 500-1000 dollars).

Casio High Speed EXILIM EX-FH25 10.1 MP Digital Camera
Quote
0 #19 Robert Ellefson 2013-07-15 07:19
@Angie Savela: From my impression of this experiment's objectives, it would not seem that high accuracy of the measured load imposed is of primary importance. Given this, I would suggest that measuring the load by measuring the hydraulic pressure applied to the known, fixed piston area will provide a sufficiently accurate measurement for documenting your results without needing a load cell. Of course, this point is moot if you do in fact obtain suitable specimens that fail below 50 tons.

As for sample isolation, I have very little practical experience in analytic chemistry, far too little to suggest anything with more authority than you possess. Perhaps simply cleaning the apparatus reasonably well between crushing events and using clean sample bags or jars that get sealed immediately following each crushing experiment will suffice? Hopefully somebody with knowledge of any potentially useful analytic techniques will be able to provide further suggestions. I don't know offhand who that would be though...
Quote
0 #18 Edwin Pell 2013-07-13 01:02
Here is a ten pack of 10cm by 10cm by 7.5um nickel for about $250.
http://www.advent-rm.com/catalogue/items.aspx?criteria=line&linenumber=NI1872
Quote
0 #17 Ecco 2013-07-13 00:52
Not an expert, but wouldn't the best procedure to obtain thin strips of metal be through rolling? 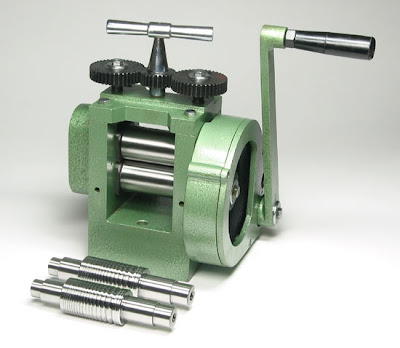