Discussion and findings on success since Saturday 10/11/12

We had what appeared to be a very successful loading, with strong and compelling evidence provided by the change to a lower resistivity of the wire over the course of the loading cycle.  There is the possibility that we may be able to load even more hydrogen into the wire in further experiments over a long period of time.

Additionally it has been found that during the course of the active experiment there was also a period of apparent loading as can be seen in this graph. 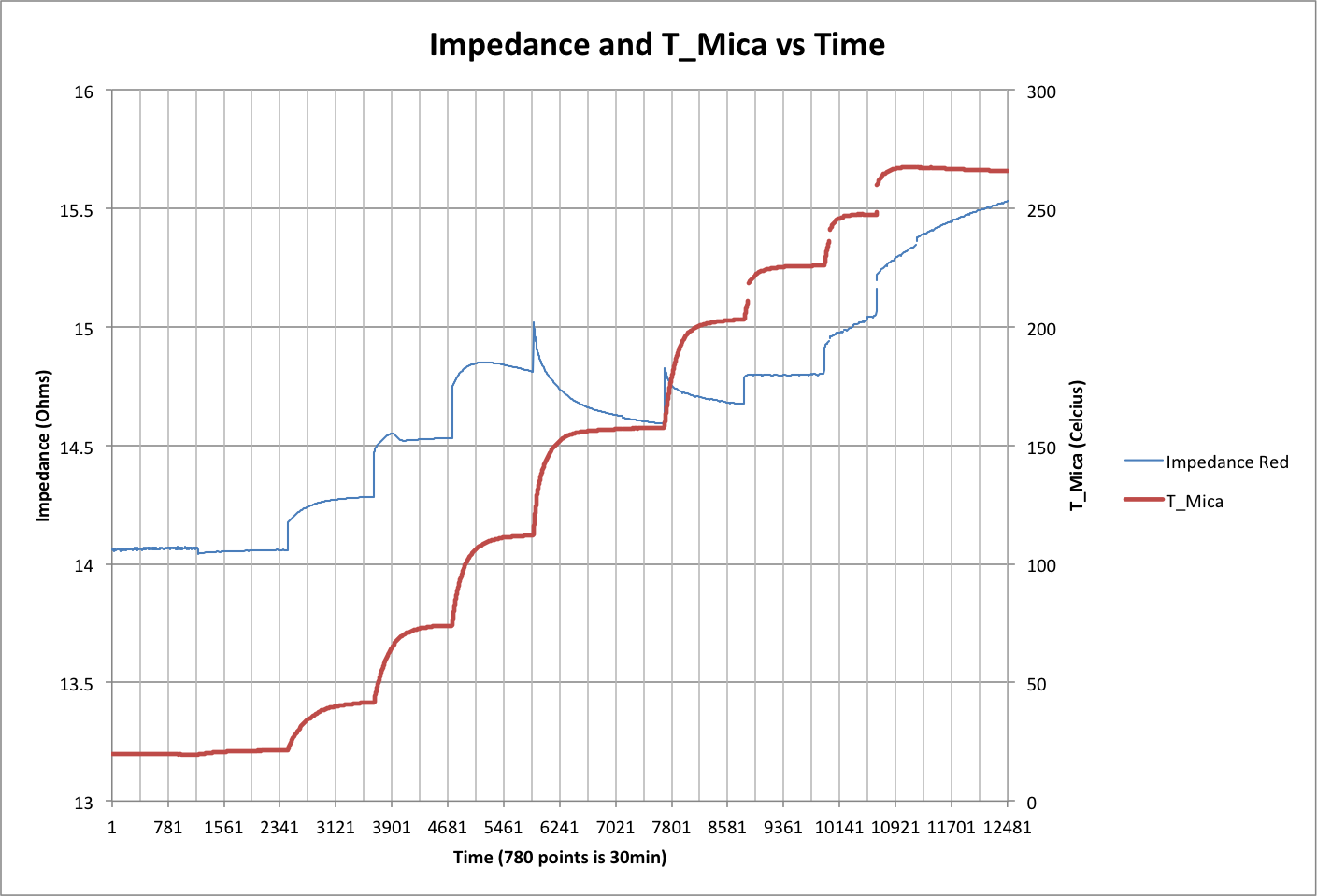 As you can see - initially the resistance increased, but at a certain point, there was some resistivity reduction even as more temperature was recorded in the T-Mica. This is extremely interesting. It may point to the loading/burning cycles suggested for commercial LENR configurations and why they need control and multiple reactors in a viable solution. Celani says that the bulk of the loading takes place in 10 - 20 minutes, this is what we found in our loading over the 10/11th November 2012 weekend. This would therefore require a reliable commercial design to have 3 active cells - 1 for cooling, one for loading and a third for “burning” and this may explain the configuration of 3 reactors in Rossi’s 1 MW reactor sub units or 9 in Defkalions configuration. When burning - a reactor working as part of a team could run at much higher temperatures producing dry steam even.

A single reactor would require times when it was at around 125-160 for loading and therefore would not be able to consistently output dry steam and therefore would be limited to producing low grade heat and may account for the specification of the home E-Cat and its need for kWs of heating 1 hour in six.

We also learned a lot about using the calibration data to determine the most useful calibration curves for excess power calculation.

Our active run was done in a series of about 7 power steps to bring it up close to what we did during the calibration runs and allows us to compare how different wires are acting under different gas mixtures.

Based on our current assumptions, which we may need to review, we are measuring 2 to 3W of excess heat in the cell which has settled at about T_Mica= 265 C, however we do not consider this to be above the uncertainty/noise level, yet.

We will run the current experiment for a few days or until failure whichever is sooner - it will be interesting to follow:

Really interestingly, it might show us the time it takes for most of the H2 to be “burned” / lost based on the R/R0. This might give us more clues as to the duty cycle of these reactions. Maybe because the cell produces a modest excess output, it can run for days, if it produced 100s Watts then maybe the celani cell would have to go through a H2 loading cycle relatively quickly. Loading is separated from excess heat - but we believe we have shown that it can occur in the same cell.

It will also give us some time to explore the robustness of our data broadcasting that was severely stressed during the early part of the test with the number of connections and data downloads. This forced a change in server that whilst faster failed.

Temp in cell may not be high enough to trigger LENR.

Specifically, the local temperature of the wire may not be high enough to create the effect.

Our cell takes more power to heat it, because less of the IR is thermalized in the quartz glass than the borosilicate glass. T_mica shows the closest value of what the temperature of the wire is, and Pr. Celani explained that optimal temperature for the effect was between 250 C and 350 C.

Furthermore, increased current may create more near IR which is partially lost thought the quartz tube, see our previous analysis.

We don't want to risk any more current in the wire at this stage.  We are already have twice the power that he had in his wire. It may damage it.

If a set pressure of 2 bar at cold is not good enough to trigger the effect, we reduce the power input drastically and decrease the pressure at 0.5 bar. In this condition, the wire will tend to retain heat instead of dissipating it.

At some point we may decide to turn on both wires in order to achieve similar current and temperature  in the Celani Wire to what he had in the demonstration.

Loading process may also need to cycle for best effect

When we started the loading, we thought we had to do it over 2 - 3 days, which we kind of did. We heated the wire up to the requisite temp in H2 and let it sit there. Celani says however, that  the majority of the loading occurs in the first 10-20 mins as noted above - so why have it sit there for 3 days? Maybe we should be cycling it, ie, let it cool, bring it up to loading temp, repeat... n times.

In summary, after 11 hours since beginning to heat the Celani wire with current running through it,  the experiment is just starting.

123
0 #28 Stefan 2012-11-17 19:59
Even if Rossi and Defkalion have a practical LENR solution they will not share "IP" with community. This project allows a public validation of LENR irrelevantly to assumption about validity of Rossi or/and Defkalion claims. The bottom line is that such public project makes the believe or disbelieve in Rossi and/or Defkalion totally pointless.
Quote
0 #27 Robert Greenyer 2012-11-13 23:36
@ David / Ecco

It may not be problematic to have the wire at a high temperature, but high power to achieve this may be a problem. Celani advised to use a gas mixture and lower pressure precisely to reduce thermal conductivity so that the wire can have a higher temperature without compromising the integrity of the rest of the apparatus.

When we have been able to trigger the effect a few times - it might be interesting to have a power input curve that rather than stepping slowly, slides rapidly up to activation temperature range.

Celani does not reccommend using pure H2 after loading. We have shown the ability to load to some degree with a gas mix also.

We are planning to see if hard wiring the fan on will fix the cyclical voltage issues - then the voltage on the PSU will be more dependent on ambient but I believe much less an effect than the dodgy sawtooth we saw and also slower and easy to correlate and account for.

Celani says his wires activate at over 250 - 350 degrees - we were just over the bare minimum on a wire that was on its first load cycle. David is right in saying that the gas choice is to prevent the glass softening.

We are just looking at the evidence from the Loading/Burning phases and seeing what is needed to do this and what temperature things occur at and making a conjecture.

If they have what is claimed, then it makes no difference to us, great I say. Others still made cars even when Henry Ford was churning them out in the 10,000s and people still research how to make better engines. Many of the competitors have made some of the best cars ever made.

We believe that a simple, repeatable, easy/cheap to modify, maintain and quantify experiment that does not run at super high temperatures and threaten neutron production has the potential to allow thousands of budding scientists and professional bodies to explore this phenomena and push the science and its understanding forward.
Quote
0 #26 Ryan Hunt 2012-11-13 16:32
We do pull vacuums between gasses and then purge the supply lines repeatedly. We are confident Oxygen is not getting into the cell in the current phase of the test because the pressure inside the cell is so much higher than atmospheric.
Quote
-1 #25 Al Potenza 2012-11-13 16:27
While the conjecture about the configuration of Rossi and Defkalion reactors is interesting, I am concerned that you may be taking their claims too seriously. I won't argue the validity of their extravagant supposed results here but I have to point out that if they are right, there is not much point to this research.

If Rossi and Defkalion are virtually ready, as they claim, to sell commercial, stable and certified kilowatt level LENR reactors, what are you doing with single wires and arguable, low power levels? What's the point if the problem is already solved?

Your research makes the most sense if Rossi and Defkalion can not be believed. Thus, how they configure their reactors is sort of moot, don't you think?

As it happens, I don't believe Rossi and Defkalion and I think what you are doing is an excellent idea! Sorry to interrupt but I think it needed to be said.
Quote
0 #24 Ecco 2012-11-13 16:27
@Gerard Essing: one could make several vacuum cycles with inert gases (for example helium) before injecting hydrogen to ensure that very little oxygen remains within the cell.
Quote
0 #23 Gerard Essing 2012-11-13 15:45
Hi guys, great work and your efforts are much appreciated. A question that came to mind that perhaps was already addressed elsewhere: how sure can we be that no oxygen - hydrogen reaction occurs inside the tube?
Quote
0 #22 David Jones 2012-11-13 15:32
Perhaps Celani adds just enough Ar to ensure that the temperature gradient across the gas mixture is great enough to reach the activation temperatures in the centre of the tube whilst ensuring the glass wall temperature remains below the softening point (~270 Celsius).
Quote
0 #21 David Jones 2012-11-13 15:11
Ecco - good point I had not thought of that

If you are using 75H2/25Ar. Then changing to 10H2/90Ar might enable you to get to higher temperatures due to the much lower thermal conductivity of Ar compared with H2 (1:10)
Quote
+1 #19 Ecco 2012-11-13 15:02
@David Jones: the best idea would probably be asking Celani directly why he does that, but I speculate that using a mix of inert gases allows to check reactor behavior at different H2 concentrations without varying pressure. Or controlling better thermal conductivity (for example by keeping it constant) if runs with different gas pressures/ H2 concentrations are planned. Or maybe Celani introduces H2 in the cell only after filling it with an inert gas, in order to remove as many impurities as possible before starting the actual experiment. Who knows!

In absence of such detailed plans probably it's better to simply use hydrogen directly at 100% concentration, I think.

@Robert Greenyer: if keeping the PSU fan enabled all the time solves the problem and if the fan itself does not suffer from continuous use, then it is definitely a good idea to perform this modification as soon as testing conditions permit.
Quote
123
Refresh comments list
RSS feed for comments to this post